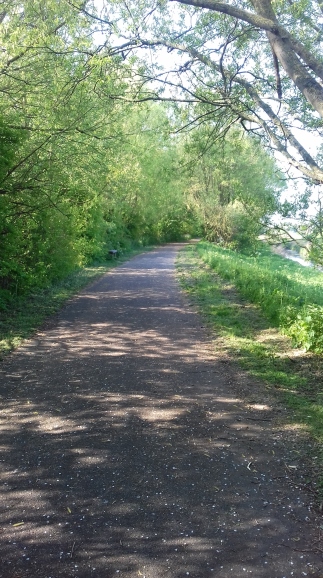 Our walks have been limited during this lock down. This means different things to each of us and for me it means the long walks along the coast have gone, with the wind and the brine in my throat, the splash of salt in the air. I miss this very much. We all miss something don’t we?  Instead I find myself taking the same route, skirting the edges of the housing estate in which I live, passing the building site where the shells of hundreds of new houses sit like cages, shuttered down, gated and padlocked, the windows releasing pieces of plastic which flap forlornly in the wind.  A few times a week we walk along the dried muddied paths, detritus and fly-tipping creating the effect of an abandoned world which has gone back to its roots. The new estate is on the back road which has been flooded all year, always has been, one wonders how anyone got planning permission for building there at all. One time it was a field full of horses tattered and tethered, hoof deep in mud.  I think about those horses each time I pass. They seem to belong to a different world altogether, one that is straining to come back.

We take this road because it’s quiet.  The other route through the euphemistically named ‘nature walk’ through the woods is always busy with dog walkers and not really a wood because it’s built on the debris from the original housing estate (where we now live) piled high, grown over reclaiming the wildness of the place it once was or hoped to be.  I can’t grow anything in my own garden because two inches down and all you find is rubble. Most neighbours have paved or concreted drives and gardens, some have astro turf which occasionally I see them hoover! Trees thrive though, hundreds of them.  We’ve seen foxes, rats (lots of them), stoat (sadly a dead one who dared to venture out) and then there’s the buzzard. Always there, stalking, hovering, buoyed up in the warm air currents above the wood that is growing in spite of the hostility of the ground from which it springs. In a few weeks I’m hoping the elderflower will be out although I have a feeling it will be late this year.

What have I learned from these walks? In this cramped and crowded space we have managed to find sanctuary and solitude. We go late at 5.30 when everyone has done their daily bit of exercise, and in the past few weeks and in such limited space I notice the numbers dwindling day by day. I used to walk these pathways before and never saw anyone, I’m sure it will go back to being the same, is it bad that I look forward to this?

There is one place, the last pathway we go through on our way home. It has a bench and it has a stream of sorts where there are two swans, a few ducks. The stream also has empty bottles and rubbish in it. The ducks don’t seem to mind. There’s an allotment I long to belong to, looking calm and tranquil with its little painted sheds and rows of neatly growing fruits and vegetables. A sign that life is continuing there as normal even if it has gone into stasis elsewhere.  Over the past six weeks the pathway has become more and more overgrown. Yellow primroses have given way to bluebells and the leaves have suddenly sprung into vibrant life in lime green sprightly brightness in every shade of nature’s making. From something unprepossessing as a housing estate has emerged this burst of life. We sit on our bench, not many pass at this later hour, we like to count who says ‘hello’ and who doesn’t. Most do. The buzzard alights sometimes in the tallest tree and it’s always quiet, every bird in its individual song. Make the most of this, I think, it won’t last.

I’d always found strength in sea, mountains were second and then came trees but I’ve discovered to borrow from Wordsworth’s Lines composed a few miles above Tintern Abbey:

Therefore am I still

A lover of the meadows and the woods,

And mountains; and of all we behold

From this green earth; of all the mighty world

Of eye, and ear, -both what they half create,

And what perceive; well pleased to recognise

In nature and the language of the sense

The anchor of my purest thoughts, the nurse,

The guide, the guardian of my heart, and soul

Of all my moral being.

Nature forbids that time will stop as we have all stopped. I have one tree that marks this for me. In my mother’s garden is a crab apple tree which is now in bloom and from whose fruit, when the apples have fallen, I intend to make crab apple jelly. I say that now when the fruit is still pretty in its pink and white frill but when they fall and I have to collect them before they rot I will say it’s a waste of time, I’ve so much else to do and I will mean it when I say it. 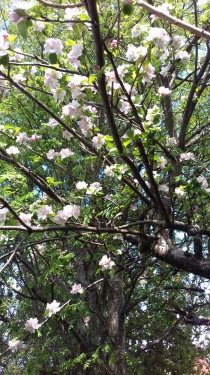 The apples won’t stop though – they will grow and they will ripen and they will be ready to fall and although I will complain, I will make the jelly and remember this springtime when it was the trees that grew quietly alongside us, easing us along. And in the Autumn I will put the jars of bright jelly to the light ‘as clear and shining/ as stained glass and the colour of fire’* and pray that I will be grateful.