So there’s this spider in my garden, well there are lots of spiders in my garden looping the loop across from the buddleia to the apple tree across the washing line and around the bins and back again. It’s become like an obstacle course just getting from one end to the other. Fortunately I don’t mind spiders at all, I quite like them but I am tired of getting my hair tangled in their pretty spinning webs as I make my way through the garden. The threads are invisible unless you view them from the right angle and sometimes one has the impression of a trapeze artist balancing delicate legs spindly on a wire. This week, on the buddleia, I saw a Red Admiral butterfly spinning like a whizzing top caught in one of the webs and rushed out to find a wasp trapped alongside it, battling the sticky fingers of the spider’s world the two of them fighting to escape and becoming tangled in each other’s terror. Unwinding them was easy getting stung by the wasp’s anger less so but somehow I managed it. Off they went, the two them, air-spinning and buzzing, leaving a disgruntled spider to lament their loss. 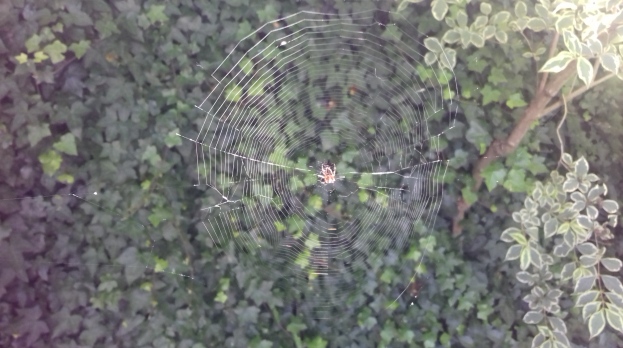 The spider interests me because I’m struggling most days to keep the writing going. It’s too simple to see the spider patiently rebuild its web as a metaphor for the fact that I must keep going no matter what. So I try and so does the spider. I write here on the blog page, in my journal and in my head, thoughts spilling out like the gossamer string from a spider spinning. I do take comfort from that spider being undaunted by its task. No matter how many times it’s knocked down, up it gets again and starts over.  I don’t see it as a threat, something to be held at bay as the fairy Puck keeps the spider from Titania in A Midsummer Nights Dream: “Weaving Spiders, come not here;/Hence you long-legg’d spinners, hence” he tells them and she protected safe in her bower.

The poet Walt Whitman watches a spider in his poem A Noiseless Patient Spider in its glorious isolation spinning out its web “filament, filament, filament, out of itself,/Ever unreeling them, ever tirelessly speeding them.” He thinks of himself, of his soul, standing “Surrounded, detached, in measureless oceans of space,/Ceaselessly musing, venturing, throwing, seeking the spheres to connect them” waiting for the moment when the “gossamer thread” he flings will be caught somewhere and land and peace of a kind will come to him.

Is this what we are always seeking?

Walking across the dunes some days later across the Autumn crisping bracken, the damp of the land as the sea mists bring the change of the seasons with them, I see them again, the webs. Tiny spinning creatures this time never seen but creating a network of silver trampolines, glistening with mist and dew across the ever-shifting landscape. They look like they are covering fairyland or close enough, if ever there was one. Beside them hopping creatures, frogs or maybe natterjacks but no too small for the rare toads although we do have them here these extraordinary creatures. The frog moves along slowly, cautious beneath the webs which give him cover from our prying feet and eyes.  And on he goes leading us with him across the dunes and grasses and pathways until…

The sea, the vast expanse of it.

But they are deceptive these sands, the dunes that lead to the beach and then to the sea. The grasses and plants that grow here create poetry in the saying of them: Sea-holly, Cat’s ear, Red fescue and Spreading meadow grass. The dune slacks are covered in creeping willow, and I wonder as I always do: how does a willow creep? Slowly it would seem, dragging itself with the wind along the sand along the edges of footpaths where it favours the ones less travelled, the ones less found. On the strand line, the line which separates the outgoing tide from the sand on the beach only highly specialised adaptable plants like Sea Rocket and Prickly Saltwort can survive an environment which is described as ‘inhospitable’ but I never find it so. If something can grow here how can it be so?

We watch the sand and sea that always vanishes the moment you think you’ve caught it hovering on the edge of your eye, the mud banks which lure the unsuspecting walker deep into their quicksand depths. Visitors to Southport see Blackpool across the bay and think they can walk there. It doesn’t look far they think so out they step and find themselves trapped and cornered by the incoming tides. It’s the same up past Sefton along the Fylde coast and on.  Quick sand also called ‘running sand’ is a mixture of sand and water or sand and air that looks solid but becomes unstable when disturbed by stress, like someone walking on it. It looks innocent. But it’s not and that’s the trick of it. I think back to the webs and their fairyland depths and wonder about the magic of it all because sometimes that is how it feels out here, like magic.

I grew up with stories about people being submerged in these quick sands – the best story I remember was about a coach and horses racing across the sands, the entire group swallowed whole, sometime centuries ago. At night, so they say, you can hear the whinnies of the horses, the cries of the coach driver and his passengers screaming beneath the sand. Stories with truth somewhere buried beneath them – the sand will get you but it’s the tide that will kill you, the water not the quicksand, rushing in to claim you.

Now there’s a story worth spinning… 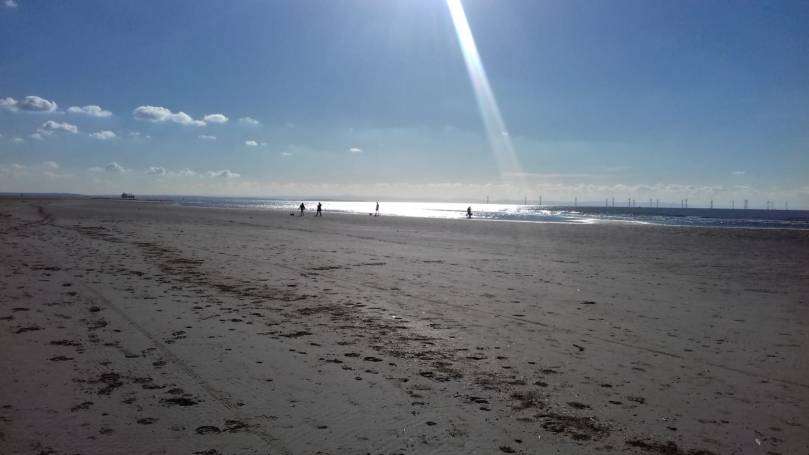 One thought on “Spinning webs”