Leaves.  That’s what I think about when I think of November.  Lots of them. Not the book type, the turning over a new one type, I mean the gathering up and composting type. I spent an hour or so gathering them all up yesterday, uncovering moss and mould, upturning rotten apples hidden beneath and making sure the ivy on the back wall stayed in place because I think (I know, I’ve seen them) a family of hedgehogs lives there. I even bought a new rake and this one works.  The cat eyed me cautiously in the damp air then thought better of it and ran in, watched me from the window. I thought to catch the stray light of the sun but it remained hidden, stubborn behind its cloud. Not a place, you would think, to be writing but I did write, in my head.

I worked out a knotty problem to do with a character in my new novel and had her working there beside me in the garden. What would she do? Well she wouldn’t be out here gathering leaves up for a start because she’s an artist and puts her work before everything else, even her family. She’d be looking for something else in them, the colours, the textures and the movement of them refusing to stay put. Imagining I am her in this moment gives me an insight into who she is and how she would react to any of the situations or places I put her in. It’s an invaluable lesson.  And then when I’ve done that I imagine the other main character, the actual narrator of my novel, doing the same thing.  She would do the work that the artist wouldn’t do, she is the character who enables the artist to be who she wants to be but at what cost? That’s the conflict, that’s where the story starts to push its way out from and I’m still finding my way into it.  I know that story starts from character but they have to be so much more than the sum of their parts.  Spending an hour, clearing away the debris of Autumn, I start to enrich my picture of them.  I find myself talking to them and they become present with me in this moment.

When I don’t have time to write or when I’m tied up with other things or when life just crashes into me which it often does, this is what I do. I go somewhere else and write in my head.  It’s better than sitting there staring at a blank screen.  It doesn’t matter that I don’t have a notebook or a pen, I remember the pull of the tough ivy tendrils refusing to budge, the smell of the rotting leaves when you dig down from the crisp and red orange tips of them, the sound and shift of the brush across flagstone as the last of the buddleia is swept away.  This is what I will remember when I come to write about it later. 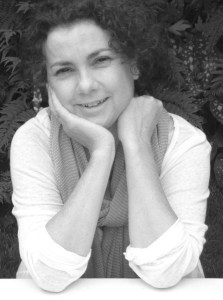 Jo Reardon is a writer of fiction, drama and poetry.

She works as a Lecturer in Creative Writing at the Open University, where she is also an Honorary Associate in the Faculty of Arts & Social Sciences.